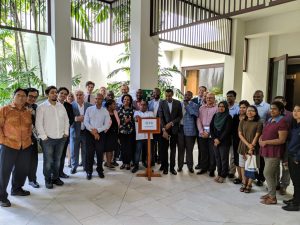 G16 Group was one of the four finalists in the Seafood Champion Advocacy, together with Stephen Fisher, Francisco Blaha and COMEPESCA. Together with the other finalists, SeaWeb recognised the G16 Group for the important work they are doing. The G16 Group of Like-Minded Coastal States of the Indian Ocean is an informal group that got started at the margins of the first meeting of the Indian Ocean Tuna Commission (IOTC) Technical Committee on Allocation Criteria in February 2011. Since then, the G16-Group have been meeting regularly prior to each TCAC and annual Commission meetings. More recently, the Group has been active, having meetings at various times of the year, but largely focused on drafting proposals important to the coastal states. So far, 19 meetings of the G16 Group have been held with participants representing 15 to 17 coastal states of the Indian Ocean.